During her speech in parliament, the St Albans MP said that, ‘it is not right or fair that other European countries can dodge animal welfare issues, can hide anonymously behind inadequate labelling and at the same time undercut our farming industry.’

Anne made the claims after it was found that 6 EU countries were still non-compliant with key animal welfare measures. ‘This wilful non-compliance cuts costs for EU farmers’, said Mrs Main, ‘and perpetuates misery for the animals.’

‘In this bill I want to make it a legal requirement so that we have the best information when we choose which products to buy off the shelves.’ Currently, there is no country-of origin requirements for milk, and the less stringent rules for processed meats, where it is estimated that up to half of the total slaughtered meat volume falls into this category.

‘If British consumers were made aware of the lower welfare standard in many European countries, I believe that they would be choosing to buy British and buy compassionately.’

A quote from Conservative Animal Welfare Foundation was included in Anne Main MP’s speech for the Bill. 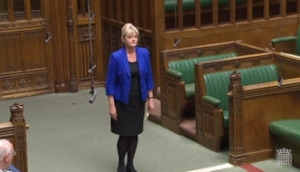 Motion for leave to bring in a Bill (Standing Order No. 23)

That leave be given to bring in a Bill to require the labelling of farm produce sold in the UK to include country of origin and whether produced in accordance with designated animal welfare standards; and for connected purposes.

Today I am arguing for more transparency—farm-to-fork traceability—to enable the British consumer to make a more informed decision about what they are buying. Currently we have a confusing mixture of voluntary standards bolted on to EU legislation, with some products offering greater clarity of origin and production standards than others. It took the Europe-wide scandal of horsemeat finding its way into our food chain to jolt the European Commission into action. That scandal was a big wake-up call for the meat industry EU-wide.

The UK is already implementing new EU rules on country-of-origin labelling for unprocessed pork, lamb and poultry. I stress that that meat is unprocessed, because there is a whole other confusion surrounding imported meat that is processed into, for example, sausages in the UK and then labelled as a British product. However, that is a can of worms for another day.

Although there are now better rules on labelling and the traceability of meat products, the same is not true for milk and milk used in dairy products, and that must change. Our British dairy farmers are having a tough time of it, and milk prices are very low. With Britain operating under current EU rules, we cannot unilaterally bring in mandatory country-of-origin labelling. To do that, we would need to get agreement from the Commission, but so far the Government have not been able to convince the Commission to agree, which is regrettable.

Currently the Commission favours only a voluntary code on dairy products. A May 2015 EU report covering dairy indicated that it was felt that introducing such a measure would prove costly and bureaucratic. However, our own Farming Minister has said:

“I do not accept the Commission’s argument that it would be too complicated and too difficult to do this on dairy products. It might on some dairy products, but on butter, on cheese, on some of the staple dairy products you could deliver country-of-origin labelling relatively inexpensively…The commission is very resistant to going this way, so we are not going anywhere fast on this agenda”.

“There is obvious consumer demand for clearer information on the country of origin of food products as illustrated by the existing rules for fresh meat within the Food Information to Consumers Regulation…A mandatory labelling system would help the UK dairy industry showcase its products and reassure consumers on their provenance.”

There we have it: clear mandatory labelling is what our Government want. It is in the interests of British farmers and the British consumer.

The Government have said there is great potential for significant long-term growth in the UK dairy sector, with the global market expected to grow at more than ​2% a year for the next 10 years. Globally, in or out of the EU, our dairy farmers should therefore have a bright future.

In its farm gate prices report in March 2016, the Environment, Food and Rural Affairs Committee said:

“It is unacceptable that consumers cannot buy British in confidence and could be misled as to country of origin when they are buying food from their supermarket. It is essential that labelling on produce is improved.”

For consumers who care deeply about animal welfare, we also need clearer labelling covering animal-rearing processes. Consumers do care about how animals in the food chain are cared for during their short lives. There are specific EU requirements on the keeping of calves, pigs, laying hens and broilers. The EU banned conventional cramped cages for laying hens in 2012, and it specifically phased out the use of individual stalls for pregnant sows in 2013. Those appallingly stressful stalls keep pregnant sows caged, usually on concrete, so they cannot move about. Such stalls cut farmers’ costs, but they were banned for cruelty reasons in the UK in 1999. They were specifically banned in the rest of the EU from the start of 2013.

Shockingly, more than two years on from these stalls being banned on cruelty grounds, six EU countries are still officially non-compliant with their own key welfare standards. Such wilful non-compliance cuts costs for the farmers involved, but it perpetuates misery for animals. The consumer absolutely has a right to know that a cheap cut of pork on a supermarket shelf has been produced in banned conditions.

Dr Joyce D’Silva, ambassador for the campaign group Compassion in World Farming, has said she believes the countries failing to comply were France, Belgium, Cyprus, Greece, Finland and Slovenia. She has said:

a level playing field on the cost of pork production and on animal welfare.

My hon. Friend the Member for Tiverton and Honiton (Neil Parish), who co-sponsored the Bill with other hon. Members, and who is Chairman of the Environment, Food and Rural Affairs Committee, accused the European Commission in October 2015 of “prevaricating” and of giving European farmers an “unfair advantage” by allowing them to flout an EU ban on sow stalls. That ​unfair advantage is bad for not only the pig but pig farmers, because it has led to 60% of our pork being imported, undercutting our farmers.

If the British consumer wants to be sure that the pork on their plate is cruelty-free, clearer mandatory labelling is the answer. Currently there is only one EU-wide system of compulsory labelling on animal welfare, and that is for table eggs. The EU has been slow in obliging other member states to adopt higher welfare standards. Perhaps that is why the EU strategy does not plan to extend welfare labelling beyond eggs. If it did, it would certainly shame some key EU countries over their unacceptable animal farming practices. The Conservative Animal Welfare Foundation has said,

“As demand for livestock products continues to surge, particularly in developing countries, the importance of ethically sourced food becomes more important than ever as more animals are farmed.”

This country already has a voluntary scheme that demonstrates clear labelling and animal welfare—the Red Tractor scheme. It demonstrates that food is high-quality British produce and that it has been farmed, processed and packed in the UK. It is the largest food-assurance scheme in Britain. It ensures that food is traceable and safe to eat and that it has been produced responsibly.

Our farmers are doing the right thing, and they deserve our support. It is not right or fair that other European countries can dodge important animal welfare issues, hide anonymously behind inadequate labelling and at the same time undercut our farming industry. If British consumers were made aware of the lower welfare standard operating in many European countries, I believe they would choose to buy British and buy compassionately.

By bringing in the Bill, we will know where our milk has come from and where an animal was reared. Importantly, we will also know how well it was treated in its life and, potentially, even how it was slaughtered. By championing a robust, sustainable, compassionate British farming industry, we are delivering jobs and prosperity and ensuring our own food security. I believe that that is what the British public want, and I would like our Government to bring in a Bill to do that.

Bill read the First time; to be read a Second time on Friday 6 May, and to be printed (Bill 161).