Campaigners and MPs speak out on global day of action to stop live animal transports, 13 September 2017

Protesters gathered outside Parliament on Wednesday as part of a global day of action against long distance live animal transports.

Campaigners gathered on Parliament Square between 12.30pm and 2pm

Demonstrators held up signs that read “Stop Live Transports” and “trucking hell” as MP speakers including Craig Mackinlay, Theresa Villiers and Caroline Lucas called for an end to the suffering in live animal exports for slaughter.

Over 30 organisations around the world joined ranks for the day to host rallies, marches and talks – from London to Paris and Tel Aviv to Sydney.

Compassion in World Farming, organised the event and said that millions of animals are transported long distances in cramped conditions every year, causing horrific levels of suffering. Many animals often die before the end of the journey, or face “cruel” slaughter methods at their destination.

Conservative Animal Welfare Foundation joined the rally with our Patron Sir Roger Gale MP. We condemn the “unnecessary” export of live animals for slaughter and believe the trade should be replaced with a trade in meat on the bone, not on the hoof’.

“I have been totally supportive, for years, of the efforts to stop live exports out of the Port of Ramsgate.   This vile trade should stop now.  It is unnecessary and cruel”

Theresa Villiers MP announced that she will bring a Bill to Parliament on the 25th October to end live animal exports. She stated in her speech before the crowds:

“Can I welcome you all to Parliament Square. As you’ve heard, this is an issue which I am passionate about, I believe we need to ban live exports. It’s a cruel trade which has gone on for far too long. Now is our opportunity to end this trade once and for all. On the 25th October I will bring forward a Bill to Parliament to ban live exports of animals for slaughter. I know that many people in this country, some of them will be here today, have been campaigning on this issue for 30 years. We have known for many years of animals mistreated after export. You have heard some of them repeated by Speakers this morning. This is not something we should tolerate any longer . We have animal welfare protections in this country. Yes, we want them to be stronger but there are already animal welfare protections which they do not have in the rest of the world, in many countries, and we should no longer tolerate animals being exported to other countries which do not respect animal welfare in the way which we do…”

Craig Mackinaly MP talked passionately on his work to end the cruel trade:

‘”Ramsgate is now shamefully the only port in this country which has live animal exports for slaughter. Now before getting elected I spoke at cross party platforms and I promised the people then, that I would do all I could do to stop this dreadful and unnecessary trade…”

At the event, Craig Mackinlay , who is hoping to re-introduce a Private Members Bill which would remove the obstacle in UK law preventing local authorities from banning live animal exports for slaughter, addressed the rally encouraging people to speak up for farm animals and make it clear that it is time to stop these horrifying journeys.

“I was delighted to be invited to address the Stop Live Transport event on International Awareness Day and to reassure the protesters that I will continue to campaign for the removal of the obstacle in UK law that prevents local authorities, such as Thanet District Council in my South Thanet constituency, from banning live animal exports for slaughter.

“Now that we have voted to leave the European Union, this leaves the UK in a better situation to ban live animal exports. The European Commission have been firm in that they would not accept any change in UK law regarding live animal exports because it would break EU rules on the free movement of goods. I am hopeful that as negotiations progress with the EU, we will finally put a stop to this barbaric practice.

“On this issue, I will not stop until we are successful.” 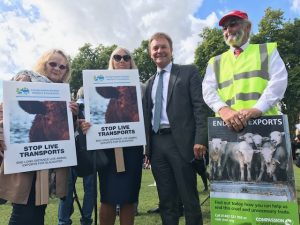 Animal Welfare Ambassador Peter Egan read a moving poem from Shakespeare on the suffering of sheep.

Caroline Lucas  MP spoke out against the cruelty of live animal exports.

Kerry McCarthy attended the event to show her support to end the trade.

KAALE spokespersons spoke on their excellent work to end live animal exports and described the suffering they see of the poor animals loaded into three tiers of trucks to their slaughter abroad. Live exports is a barbaric industry that must be completely abolished.

“I am honoured to be uniting with so many worthy organisations to fight for farm animals on this global day of action. This cruel trade is outdated and has no place in today’s world.”

We met with Anne Main MP in Portcullis House. Anne supports an end to live animal exports for slaughter. Anne said that Brexit now makes it possible for us to end the trade.

We also attended the EFRA meeting in Portcullis House where Environment Minister Michael Gove was questioned by the committee on DEFRA. It was heartening to hear Michael Gove say before the room of MPs:

Commenting on the global day of action to end live animal exports, Our Patron Sir David Amess MP said:
“For me, the mark of a civilized society is not just how we treat human beings but how we also treat animals. I have long been concerned at the inhuman conditions which animals suffer when they are exported. I wholehearted support Conservative animal Welfare Foundation at the global day of action and thank you for all that you all do to improve animal welfare.”

We want to thank all the kind MPs, volunteers, groups and individuals who gave up their time to attend the action event to speak up loudly for an end  to live animal transports.