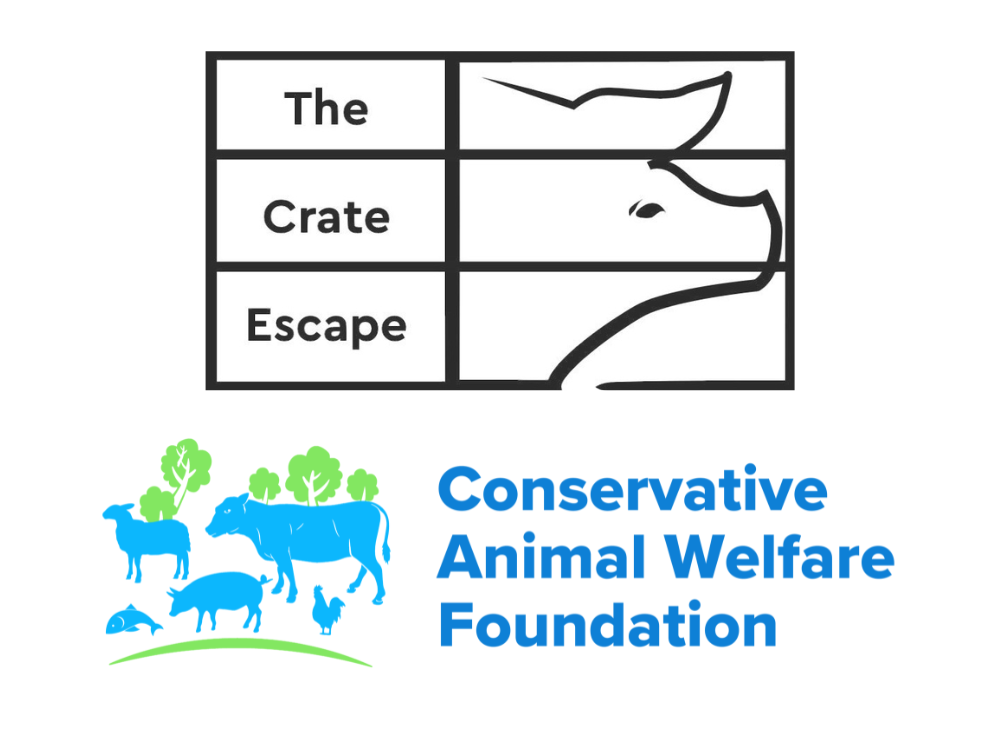 Today (Monday 14th November), the Conservative Animal Welfare Foundation (CAWF) has launched a new campaign to end the use of farrowing crates in the UK. The campaign, titled The Crate Escape, will urge the Government to launch a consultation on ending the use of farrowing crates and raise awareness of the suffering sows endure as they are forced to spend much of their lives behind bars.

Today (Monday 14th November), the Conservative Animal Welfare Foundation (CAWF) has launched a new campaign to end the use of farrowing crates in the UK. The campaign, titled The Crate Escape, will urge the Government to launch a consultation on ending the use of farrowing crates and raise awareness of the suffering sows endure as they are forced to spend much of their lives behind bars.

The Crate Escape is also a tribute to CAWF’s late Patron Sir David Amess MP, who introduced the Pig Husbandry (Farrowing) Bill to Parliament last year and spent years pushing for an end to the use of farrowing crates. The campaign is supported by other organisations Humane Society International UK and Compassion in World Farming.

Today’s launch follows a report, published earlier this year, by the Conservative Animal Welfare Foundation, ‘Banning Farrowing Crates in the UK: Transitioning to free farrowing to meet the welfare needs of pigs’, which found sows typically spend 22% of their adult breeding life (sows are crated one week prior to farrowing and produce around 2.3 litters per year) confined in a crate which severely restricts movement. Many countries, including Norway, Sweden, and Switzerland, have outlawed this practice, but still around 200,000 sows in the UK suffer in these systems every year (60% of UK sows).

The campaign will highlight the extreme restrictions farrowing crates place on mother pigs, who are unable to perform many natural behaviours, such as interacting with their piglets, rooting and nest building, or even to turn around. Studies consistently demonstrate that sows in farrowing crates experience much stress and suffering, and often endure physical injuries – many endure painful wounds and sores on their legs, feet and shoulders, caused by slipping or lying on the hard, slatted floors.

Some retailers, like Waitrose and Marks and Spencer, have corporate policies which do not permit the use of farrowing crates in their supply chains. The Crate Escape will encourage other retailers to make similar pledges.

Lorraine Platt, Co-Founder of Conservative Animal Welfare Foundation, commented: “The Crate Escape is designed to shine a spotlight on one of the most distressing practices employed in UK farming – the most severe degree of confinement of farmed animals of any system in the UK and European Union and one that much of the public is unaware of.

“The serious welfare issues associated with farrowing crates necessitate that we put an end to the physical and psychological harm that around 200,000 sows currently endure each year. We hope that The Crate Escape will demonstrate to Government, the public and the industry that we must move away from farrowing crates as soon as possible.”

Anna Firth MP, Patron of the Conservative Animal Welfare Foundation, commented: “I am delighted to support this important campaign today, and join calls to end the use of pig farrowing crates without delay. It is critical that we put the legislative wheels in motion as soon as possible by launching a Government consultation to outlaw this cruel practice. It is my hope that together we can free sows from a life largely spent behind bars, and ensure the UK does not fall behind other countries in this area.”

Alternatives to farrowing crates, many of which are designed by British farmers and engineers, are already used commercially in the UK and elsewhere. The Crate Escape will call for the Government to support British ingenuity, and pig welfare, by requiring the use of higher welfare systems, such as the PigSAFE system developed in the UK and partly funded by Defra. The new campaign will also raise awareness of the fact that, in well designed and well managed free farrowing pens, piglet mortality can be as low or even lower than in farrowing crates.

Mark Francois MP commented: “I wholeheartedly support The Crate Escape, a new campaign launched by the Conservative Animal Welfare Foundation (CAWF) in memory of my dear friend and colleague, the late Sir David Amess. He championed this issue like nobody else, having led a Private Members Bill before his passing to end the use of pig farrowing crates. It would be an eternal tribute to David to put an end to the suffering sows currently endure in the UK.”

Claire Bass, Executive Director of Humane Society International/UK, commented: “Imagine if every few months you were forced to spend five weeks trapped in a space the size of a phone box. Farrowing crates clearly cause enormous suffering to intelligent and sensitive pigs, and should have no place on British farms. The UK must follow the trail blazed by countries like Sweden and Norway and ensure that both our laws and our subsidies fast-track the crate escape for pigs. And our major food retailers, including supermarkets, have a key role to play in supporting their suppliers to transition to crate-free systems too.”

James West, Senior Policy Manager at Compassion in World Farming, commented: “Britain prides itself on its high animal welfare standards. Yet, every year in the UK, around 200,000 sows are forced to endure unimaginably miserable lives in crates. These cruel systems confine, restrict and prevent animals from expressing many of their natural behaviours. Forced to feed their piglets through bars, they are unable to walk or turn around, let alone build a nest for their young or forage for food. Instead, they bite and chew the bars and scrape at the floor in frustration.

“The terrible conditions in which many pigs are born are a stain on the country’s reputation. It’s time for the UK Government to help facilitate ‘The Crate Escape’, ending the cage age for these intelligent sentient beings.”