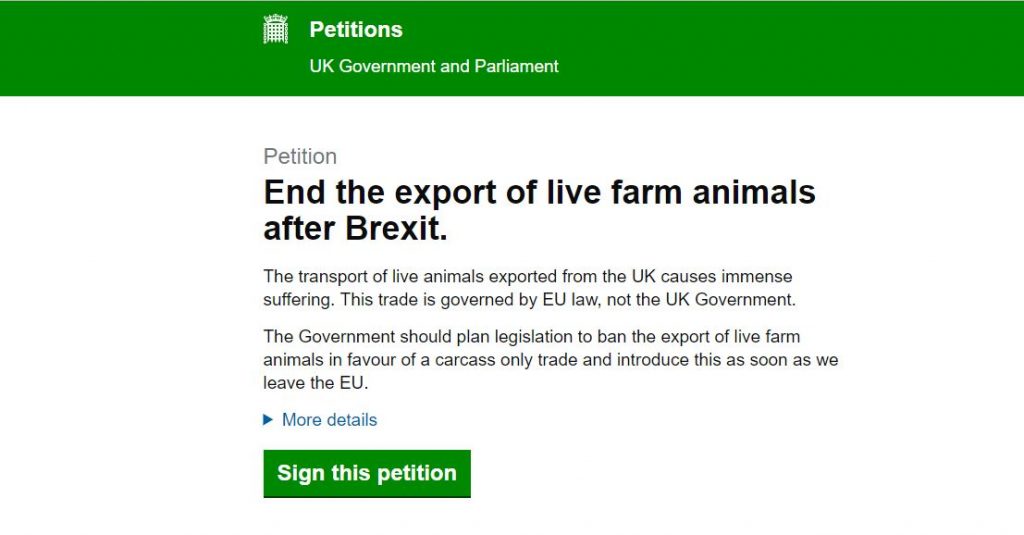 The petition to end the export of live farm animals after Brexit is now live and was launched on the 20th September.
Please sign this petition as it’s a completely new petition and needs public support now to end the suffering in live animal exports.

At 10,000 signatures,  government will respond to this petition

At 100,000 signatures, this petition will be considered for debate in Parliament

The transport of live animals exported from the UK causes immense suffering. This trade is governed by EU law, not the UK Government.

The Government should plan legislation to ban the export of live farm animals in favour of a carcass only trade and introduce this as soon as we leave the EU.

During live transport there is a high risk of animal suffering: handling during loading and unloading; strange sights and sounds and animals; heat stress and lack of water and rest. SOURCE RSPCA

Animals are crammed into unsuitable transport and endure gruelling journeys heading for conditions illegal in this country. RSPCA

The petition was created by Janet Darlinson,  involved in the SLEPT  group which is comprised of volunteers including Janet Darlinson, Paul Ellis, Laurence Tarlo, Lorraine Platt of Conservative Animal Welfare Foundation and Dr Nick Palmer of Compassion in World Farming. The group have had meetings on the petition.

Look out for the new app to share the petition, coming very soon which was designed and kindly provided by Lucy Holmes and colleagues at Holmes Wood, a leading UK based design company.

Let’s end the vile trade of unnecessary live animal exports- please the link with family and friends now by email, and social media and with our MPs.