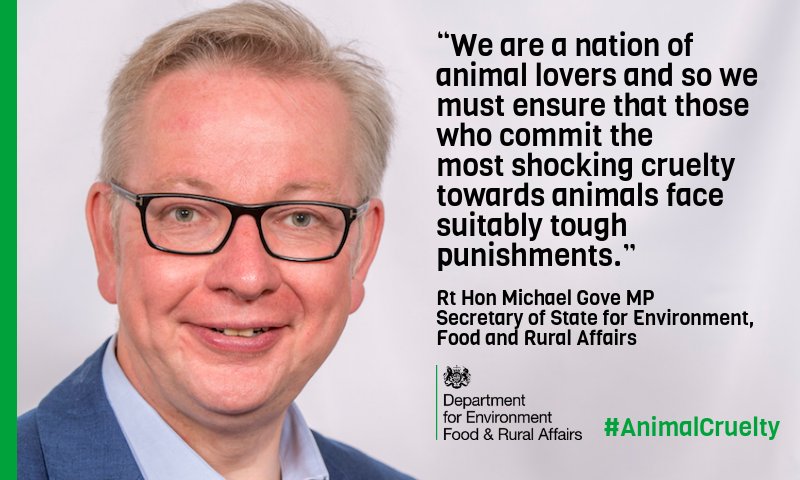 Conservative Animal Welfare Foundation welcomes the announcement that the Government plans to increase the maximum sentencing for animal cruelty from six months to five years.

There has been increasing pressure to raise the maximum penalty for animal cruelty sentences from six months to five years in prison. Support has been growing both among MPs and the public, amid calls from animal welfare groups including the Conservative Animal Welfare Foundation.

We were pleased to support Kevin Foster MP along with Anna Turley MP at the media event prior to their Bills to increase animal sentencing in February this year in Old Palace yard.” 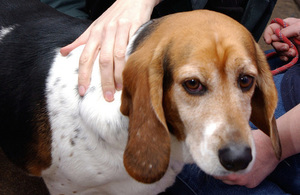 Sentences for animal cruelty to increase tenfold to five years

Animal abusers who commit the most heinous crimes could face up to five years in prison under new plans set to be unveiled by Environment Secretary Michael Gove.

Currently the maximum sentence is six months but the government will announce plans to bring forward new legislation that will increase that tenfold, sending a clear signal to any potential offenders that there is no place for animal cruelty in England.

There have been a number of recent shocking cases where courts have said they would have handed down longer sentences had they been available, including a case in April last year when a man bought a number of puppies just to brutally and systematically beat, choke and stab them to death. The new legislation will also enable courts to deal more effectively with ruthless gangs involved in organised dog fights.

We are a nation of animal lovers and so we must ensure that those who commit the most shocking cruelty towards animals face suitably tough punishments.

These plans will give courts the tools they have requested to deal with the most abhorrent acts.

This is one part of our plan to deliver world-leading standards of animal welfare in the years ahead.

Cases of extreme cruelty are rare – while on average about 1,150 people per year are convicted for animal cruelty, fewer than five of them receive the current maximum sentence. The change in law will ensure that offenders are properly punished in those rare but shocking cases.

Under the government’s plans, courts will retain the ability to hand out an unlimited fine and ban an offender from owning animals in the future, but crucially they will also have the ability to sentence the worst cases appropriately. The move will bring maximum sentences for animal cruelty in England into line with other countries such as Australia, Canada, the Republic of Ireland and Northern Ireland.

Some of the recent shocking cases in which courts commented they would have handed down longer prison sentences had the law allowed them include:

A man who systematically abused and killed several puppies by beating, choking and stabbing them, sentenced to the maximum six months’ imprisonment and banned from owning animals.

A man who kicked his girlfriend’s dog to death, given a custodial sentence of just over five months, fined £1,000 and banned from owning animals.

A man who fed his dog aspirin and paracetamol to try to kill her, before beating her to death with a shovel, sentenced to four months in prison and banned from owning animals.

The move was widely welcomed by animal welfare groups and follows dedicated campaigning from Battersea Cats and Dogs Home and the RSPCA.

Battersea is thrilled that the Government plans to raise the maximum sentence for the most abhorrent cases of animal cruelty in England from six months to five years.

This shows that the political will is there to make the punishment fit the crime and so many innocent animals will benefit from their actions.

This news will be very positively received by the public, the majority of whom share Battersea’s wish to see this change. Since we launched our campaign calling for five year sentences at Westminster in February, the momentum has clearly been building and the response has been tremendous, with close to 62,000 members of the public across the UK calling on their elected representatives to back this change – and 145 politicians already have.

Battersea stands ready to help in any way we can to support this move to five year sentences and make such shocking cruelty to animals a thing of the past.

We are thrilled that the Government has responded to calls from the RSPCA and members of the public to toughen up sentences for the worst animal abusers. We now feel that those who commit these acts will soon be receiving sentences that reflect the seriousness of their crime and hope this will act as a real deterrent against cruelty and neglect.

The RSPCA picks up the pieces of animal cruelty every day of the year. Our inspectors regularly rescue animals from horrific circumstances of mistreatment, brutality and neglect. It is only through the prosecutions that we take that many of the perpetrators are brought to justice.

The strength of feeling behind a move to toughen up these sentences is huge – but at the moment the courts are limited by the law under which the strongest sentence for animal cruelty is six months’ imprisonment and an unlimited fine – but this rarely happens.

Michael Gove’s promise to bring sentences in line with Northern Ireland – which has a maximum of five years imprisonment – should help to deter people from abusing and neglecting animals and will finally mean that the sentence fits the crime.

The government will publish draft legislation for consultation around the turn of the year.

These plans are part of an ambitious programme of reform that will cement the UK’s position as a global leader on animal welfare as we leave the EU. Last month we announced plans to make CCTV mandatory in all slaughterhouses and we have committed to taking steps to control the export of live farm animals for slaughter as we leave the EU.