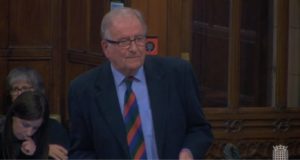 On Tuesday 29th November, the issue of CCTV in equine slaughterhouses was debated in Westminster Hall led by Liz Saville Roberts MP and chaired by Anne Main MP.

Over 20 MP’s attended the debate to discuss the issue with cross party support.
Liz Saville Roberts MP raised the many benefits of installing CCTV in slaughterhouses for equine welfare.

‘I congratulate the hon. Member for Dwyfor Meirionnydd (Liz Saville Roberts) on securing this debate. This is a highly emotive subject, which has to be approached, as the hon. Lady said, with practicality rather than sentimentality.

I should start by declaring an interest as a patron of the Conservative Animal Welfare Foundation and as an honorary member of the British Veterinary Association. In that context, I would like to quote immediately from a letter from a constituent of mine, Diana Stark. She said:

“As a horse owner and veterinary surgeon I am most concerned about possible harsh handling of horses at the end of their lives when everything should be…calm and quiet…I feel strongly that if all those working in slaughterhouses knew they were being monitored they would be more likely to be considerate towards the horses in their care.”

My son and daughter-in-law are both qualified veterinary surgeons and they both own horses, so I know at fairly close quarters that one of the hardest things for any horse owner—indeed, for the owner of any animal at the end of its life, but particularly for a horse owner—to have to deal with is that end-of-life process.

It is fondly believed that people who own horses are rich, but there are huge numbers of people right across the country hacking with little ponies often bought for their children and enjoying equestrian sports. Many of them are not rich and the costs of disposal of a much-loved animal can often be a real burden. As the hon. Lady said, veterinary costs can be quite high. I do not think that many horse owners would want, given an alternative, to pass their animals to the knacker man. Even then, there is a cost.

As my right hon. Friend the Member for Meriden (Dame Caroline Spelman) said, this comes down to a question of confidence. If the horse-owning public do not have confidence in the work of the abattoir and the slaughtermen, where do they turn? We know only too well—from the footage, from anecdotal evidence and, in some cases, privately from veterinary surgeons who witness things that they would sooner not witness as observers of slaughterhouse procedure—that there are things going on in slaughterhouses that any reasonable person would abhor. I commend the World Horse Welfare campaign for the introduction of closed circuit television cameras in slaughterhouses that deal with horses. Actually, I would go much further. I would like to see mandatory CCTV cameras in all slaughterhouses, and a mandatory requirement to provide footage on demand when required by a Ministry inspector or a veterinary surgeon dealing with that practice. The Conservative Animal Welfare Foundation also throws its weight behind the call for mandatory CCTV.

We are continually told—quite often by Ministers—that we do not want to burden rural business with additional costs but, as has been said, the costs of CCTV cameras and recording equipment has fallen so dramatically that it is practically available for anybody in this room to purchase. Indeed, my suspicion is that some probably have done, simply for their own security purposes. If it can been done in those circumstances, it can certainly be done in a slaughterhouse.

The object of the campaign is very straightforward. It is to seek to deliver, at the end of a working or entertaining life, a decent end for a much-loved and dedicated animal. I do not think that is too much to ask. I heard what my hon. Friend the Member for North Wiltshire (Mr Gray) said, but primary legislation does not have to be lengthy or difficult. A private Member’s Bill with a couple of clauses, given a fair wind from Government and Opposition—I cannot believe that either would oppose such a measure—could almost go through on the nod. That is really all we are talking about.

The idea that this is somehow difficult is nonsense. It is not difficult. If the will is there, it can be done. That is what Parliament is here for and what we are here for, and I suspect it is what so many colleagues in the Chamber this afternoon are here to support. Let’s not duck it. Let’s get on with it. Let’s seek to ensure that every working or domestic animal in the land is given a decent end and a right to a decent end. That is a very simple request. I would like the Minister, in his closing remarks, to endorse this call to get on and do it.’

‘Will my hon. Friend the Minister undertake to have a look at the Animal Welfare Act 2006 and see whether it is possible to introduce a statutory instrument to achieve this aim?’

To which the Minister replied:

‘As I think I explained to my hon. Friend, my belief is that we probably could.’

Neil Parish, the Chairman of EFRA called for CCTV in all slaughterhouses.

Defra Minister, George Eustice, gave an encouraging response to the debate in which he said that the Government has not ruled out mandatory CCTV and that it could be brought in under secondary legislation.

You can read a full transcript of the debate here:

MP’s who attended the debate listed below: