We are well known as a nation of pet lovers, so it should come as no surprise to hear that more than 100,000 Britons have signed a petition calling for changes to the law around pet theft.

Some of the stories are absolutely heart-breaking.

Consider Dawn Maw, who spent thousands of pounds, took an extended period of time off work and suffered the breakdown of her marriage after her dog Angel was stolen in 2013.

Or the case of Kieren Hamilton, who was stabbed 40 times in a burglary in which his dog Rambo was stolen. According to his mother, he just wants his dog back.

For many people, it can be hard to truly comprehend the impact that losing a pet can have.

These animals are an integral part of the families that look after them, or indispensable companions to those who may live alone.

As things stand, the law does not recognise a pet as being any different to any other inanimate possession of the same value.

But a pet is not something you can simply replace.

If your phone is stolen, a new one that looks identical will arrive within 24 hours.

The loss of an animal can have a real and lasting impact on people’s lives.

That’s why I want to see the law tightened up to make pet theft a serious, criminal and punishable offence that recognises the status and importance of these animals.

That means amending the Animal Welfare Act 2005 and the Animal Health and Welfare (Scotland) Act 2006 to make the theft of pets an offence in its own right.

In England and Wales, sentencing guidelines are based primarily around the financial value of the possession, whether it be a mobile phone, a TV, or a beloved family pet.

This situation has led to light-touch sentences for pet thieves who have wreaked havoc on victims’ lives.

It is not much better in Scotland, where pet theft is not an offence in its own right either.

Since the Scottish Sentencing Council has no guidelines for pet theft, judges rely on past precedent when deciding on sentencing.

Very often, that means the same thing. Offenders are not being held accountable in the way that pet owners and animal lovers would want them to be.

Without meaningful punishment, it is difficult to see what the deterrent would be for any would-be thief.

This certainly seems to be a problem on the increase.

Recent findings published by Direct Line Pet Insurance, using UK police statistics, show an upward trend in pet thefts in recent years, with a 14% rise in 2016 and a further 6.8% increase in 2017

Last year, 61 French bulldogs were stolen – a 27% rise year on year, while Staffies remain the most targeted dog with 210 stolen in 2017.

A change in the law could have a significant impact on these figures.

My intention is that this Bill effect these necessary changes across Great Britain – in England and Wales, but also in Scotland.

The law on this is flawed in both jurisdictions, and as a Scottish MP, it is deeply important to me that pet owners in Aberdeen get as much support from the criminal justice system as pet owners in Abingdon or Aberavon.

So I hope to work with the Scottish Parliament, and in particular my Scottish Conservative colleague Maurice Golden MSP, to get legislative consent in Holyrood for this Bill, so pet thieves all over Great Britain face real justice.

This is an excellent opportunity for Holyrood and Westminster to work together for positive change, and I hope that happens.

Ross Thomson is the Conservative MP for Aberdeen South 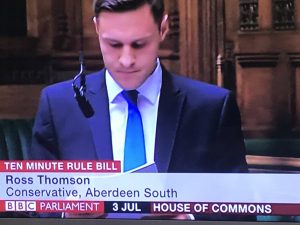 The government has rejected calls to change the law to deal with the theft of people’s pets.

More than 106,000 people have signed a petition calling for pet theft to be made a crime in its own right, saying the current sentences do not act as a deterrent.

Debating the petition, MPs expressed “outrage” at the low conviction rate for the “cruel and devastating crime”.

They called for tougher sentences for those found guilty

But minister George Eustice said the government was “not convinced” a change in the law was required, because the 1968 Theft Act “does provide sufficient sanctions”.

During the debate, several MPs said stolen animals were treated as “objects” by the current law as it does not reflect the impact on owners when they are taken, which they said was akin to a death in the family.

Amid an increase in reported thefts, they said a specific law was needed because offenders – when they were caught – were getting away with “little more than a slap on the wrist”.

“Pet theft is a cruel and devastating crime and it’s on the rise,” said Labour MP Mike Hill, presenting the petition.

“Everyone is a potential victim,” he said.

“It hits families, the elderly, disabled and the homeless.”

Conservative MP Ross Thomson said there was a need to make pet theft a serious criminal offence in its own right to reflect the “deep emotional harm” to the victims.

He will present a proposed change in the law to the House of Commons on Tuesday.

Responding for the government, Mr Eustice said the way the legislation treats pet theft “doesn’t take away from the fact that they’re more than just property”.

The latest sentencing guidelines reflect theft that causes “emotional distress to the victim”, he said, adding that this means pet theft is rightly in a category of offences that attract jail sentences of one or two years.

He said figures suggested it was a “growing problem” and promised to obtain accurate data from police forces on the scale of the problem and to investigate what can be done to improve prevention and detection rates.