That leave be given to bring in a Bill to make it an offence to attack service animals, including police dogs and horses;
to make certain offences aggravated when perpetrated against such animals;
and for connected purposes.

I am asking for leave to bring in a Bill containing what is known as Finn’s law, which arises from the experience of police dog Finn and his handler, my constituent Police Constable Dave Wardell from Buntingford. When on duty in the neighbouring town of Stevenage, PC Wardell and Finn were called to an incident involving a robbery suspect. He started to run and they followed. Eventually, the suspect hid in a garden and Finn was searching for him when a garden light came on and lit him up. PC Wardell shouted for him to stop, but the male jumped up a fence and, at this, Finn took hold of his lower leg and restrained him.

As PC Wardell looked down, he saw the man lunge forward towards Finn’s chest with a hunting knife with a blade about ten inches long. Finn was stabbed in the chest with the full length. The dog stayed to protect his handler, and PC Wardell remonstrated with the man, who replied, “What do you expect?” The man then lunged forward with the knife, this time not towards Finn but up towards the officer’s head. The officer did not have time to react but Finn did, lifting his head and putting himself between his handler and the knife. Due to Finn’s actions, the knife sliced open Finn’s head and cut PC Wardell’s hand. The officer believes that, by this action, Finn saved his life.

Other officers arrived, and the offender was taken under police control. Finn was badly injured and bleeding, and he was immediately taken in the dog van on blue lights first to a local vet and then to a specialist in chest injuries. Despite everything that was going on, and despite all the pain he was in, Finn started tending to the officer’s wound by licking it. Finn was struggling to breathe, his lungs punctured in four places. He later underwent four hours of surgery.

The incident happened in the early hours of Wednesday 5 October 2016. Finn made a remarkable recovery, with the vet commenting on his bravery and spirit. Three days later, the vet was able to remove the drains from Finn’s chest before sending him home to recover. PC Wardell slept downstairs at home with Finn for the next four weeks.

From being close to death, Finn started back training after eight weeks and, by week 11, Finn and PC Wardell were ready to start their first shift. They went back to work on 22 December 2016 for a night shift. On his very first job, Finn put his nose to the ground and found the scent of a fleeing suspect. He tracked until he found the suspect hiding, perhaps appropriately, in a stable block—it was a starry night three days before Christmas.

I have met Finn, and he is an amazing dog. Recently retired, he is one of the most successful dogs Hertfordshire police has ever had. PC Wardell feels privileged to have been his partner for seven years. Finn is action animal of the year. Finn’s story, his bravery and his desire to work are not unusual. There are 1,200 police dogs in the UK. They get kicked, punched and strangled, but rarely is a charge brought because of a gap in the law. It is difficult to shoehorn such criminal circumstances into the available offences.

When it came to charging the offender in Finn’s case, there was an offence of assault occasioning actual bodily harm of the officer, but there were only two potential charges for the injuries to Finn himself: causing unnecessary suffering to an animal, contrary to section 4 of the Animal Welfare Act 2006; or a charge under section l of the Criminal Damage Act 1971. Neither offence really captures the seriousness of an attack on a service animal, where the animal is part of a law enforcement team acting in accordance with duty and the attack aims to prevent the apprehension of a suspect, to evade the law or to remove protection from a police officer in dangerous circumstances.

Equally, where an animal is providing a vital service to a person with a disability, the seriousness of an attack is not simply in the damage to the animal but in the effect it has on the person reliant on the animal’s service. To accept such attacks on animals as just damage to property is distasteful.

My hon. Friend the Minister for Policing and the Fire Service, who is in his place, said in correspondence with me that it is

“unpalatable to think of police animals as ‘equipment’, as inferred in a charge of criminal damage”.

He promised that the Home Office will continue to work with the police on this issue. My right hon. Friend the Secretary of State for Environment, Food and Rural Affairs has said that he will investigate what more might be done.

There are legal problems with the current offences. For offences under section 4 of the Animal Welfare Act there is a defence of acting in response to a fear of harm from an animal. Of course, there is no recognition in the offence of the role of a service animal. The mental element of offences under section 1 of the Criminal Damage Act—what is the offender’s intent?—has also posed difficulties. The courts have also found difficulty in quantifying damage to animals. Normally with criminal damage it is a question of the financial value of the damage that has been done, but a seven or eight-year-old police dog is not that valuable in monetary terms. Retired police dog Finn’s injuries could not have been more serious but, when it came to sentencing, the offender was sent to custody for the offence of assault occasioning actual bodily harm—the court felt that Finn’s injuries were insufficiently serious to warrant a separate penalty.

There are new sentencing guidelines, but they do not resolve the problems of establishing a primary offence and quantifying the damage. Finn’s case suggests that the courts struggle with that. My proposal is to follow countries such as Canada, where the Justice for Animals in Service Act is now in force.

The Bill I am proposing would create a clear offence of attacking a service animal, triable either way, with appropriate sentences and a maximum of five years’ imprisonment on conviction by a Crown court. The term “service animals” provides sufficient scope to include not only animals in public service, such as police dogs and horses, but guide dogs and assistance dogs that help those with disabilities.

We are lucky in Britain to have fantastic and brave service animals like Finn, but there is a gap in the law. These animals should not be treated as equipment, but as what they really are: key members of the law enforcement team and providers of essential services. It is time for Finn’s law. 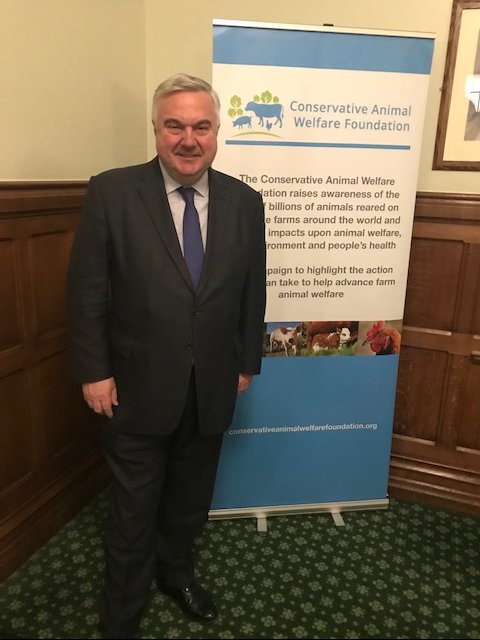 Foundation reception with Conservative Environment Network on the same day