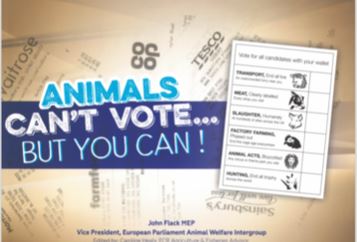 People need to stop and think about the way we treat animals.

That is the message from John Flack, Member of the European Parliament for the East of England, who makes the argument in his newly-released, hard-hitting animal cruelty book focusing on the savage abuse of animals in agriculture, tourism and entertainment.

The ground breaking book, titled Animals Can’t Vote…But You Can, takes aim at current contradicting labelling initiatives with a view for them to be replaced by a single clear and simple regime to let consumers know exactly how animals have been treated.

Mr Flack, who is also Vice-President of the European Parliament’s Animal Welfare Intergroup, said: “We humans have the votes and the power animals lack.

“Not just at the ballot box, but in choosing what we buy and eat, what we wear and how we entertain ourselves at home and abroad.

“My book presents some hard-hitting snapshots of what is downright abuse by any civilised standards.

“They are there to make people stop and think. I want to ignite something in people’s consciences and in their hearts.

“We must change what we are doing, for the animals’ sake and for our own.”

The book urges consumers to use commercial muscle to shun entertainment or spectacles involving animal cruelty and to eat only ethically-sourced food.

The book is available for free and a second edition has already been planned which will be released on Amazon and Kindle.

For enquiries about the book, contact Mr Flack on office@johnflack.uk

The animal welfare book was launched at the Conservative Animal Welfare Foundation and Conservative Environment Network joint reception hosted by Zac Goldsmith MP at the Hyatt Hotel at the party conference on October 1 2018. Speakers included Ministers and MPs.

The book contents include:  Farms Not Factories – Lets End the Cage Age,  Live Animal Transport – The “Highway to Hell” For Many, The Good the Bad and the Ugly of Abattoirs, Know What You’re Eating – We Need Proper Food Labelling, Dying to Entertain Us, The Oceans Are No Refuge – Seal, Dolphin & Whale slaughter, Our Pets Are Not Your Dinner – Dog and Cat Meat Trade,  Vote Winning Policies For (Any) Government,Twelve Things YOU Can Do Today To Make A Difference, Don’t Close Your Eyes (Or Your Conscience) Tonight… Snapshots Of So Many Other Abuses,  Useful Contacts: For Learning More About The Issues Raised In This Book  End page dedication and Authors Note.

Read John Flack’s introduction here: “Having written this book I feel I have achieved my goal and I am proud this has been recognised by my colleagues who have elected me as one of the Vice Presidents of the Parliament’s Animal Welfare Intergroup. A cross Party and cross nation grouping, one of the oldest in the European Parliament and dedicated to improving animal welfare.

It is often assumed politically that, animal welfare is the particular concern of the left, be they Socialists, Greens or Liberals. It is true that I have found common cause with many good people from across the political divide, but there are also many Conservatives in the UK – as ably represented by the CAWF (Conservative Animal Welfare Foundation) who are just as passionate and dedicated.

There are also numerous NGO’s that do sterling work and I list in the final chapter a few I hope you may be moved to learn more about and potentially support.

I am happy and proud to stand shoulder to shoulder with all people who want to see Animal Welfare standards improved across the European Union and across the world.I hope to ignite something in your conscience and your heart.I would ask you to stand with me, for the animal’s sake, for human kind’s sake.” 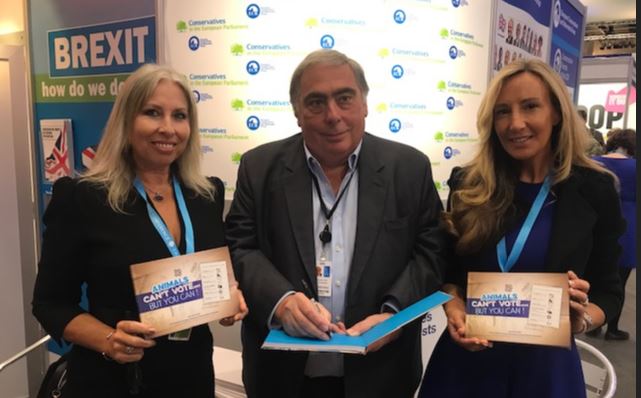